First time on a glacier, in awhile: Svínafellsjökull glacier

Q: When is an introvert not an introvert?
A: Right after a week on a group-travel trip with family (husband, and mom) and excellent strangers, in which you view all the waterfalls on a tiny north Atlantic island nation and a too-hot-to-touch hard-boiled egg at breakfast, every day for the entire week.

I can’t explain it, but right after I returned, I began to wonder if I had become someone who gets energy from other people, rather then someone who needs solitude to recharge. Maybe something interesting had happened?

The trip: Mom, Steve and I went to Iceland, two weeks ago. Most of the trip was guided: we signed up for G Adventures’ “Best of Iceland” tour, and added a day to ride some Icelandic horses. I’d been to Iceland a few times, but always in late fall, and wanted to go during a time of year when there was more light, so we could see more of the country. Mom signed on. Here are all the places we visited:

What I Loved, Overall

For the most part, scenery wise, this trip was a tour of a thousand waterfalls, plus some steam vents and outer-space vistas. I was surprised to see so many different flowers in bloom, in August. Here are a few lovelies at Þingvellir. But upon my return to Minnesota, we have quite a few as well: I’m just bored with the usual pinks and yellows of pink and and grey-headed coneflowers and Joe Pye Weed that fill our backyard. The decorations on the cake pictured here remind me of some of the delicate, alpine petals we saw.

A few years ago, after multiple re-starts due to various complications, I took a glacier skills course, out in Washington State’s North Cascades. And … hated it. I missed my regular climb buddies, I had a bad guide and as a result, nearly careened down a crevasse. My mountaineering career had a non-fatal end: I’ve stuck to dry rock with pals, since then.

I haven’t been in crampons (the big metal teeth that you strap onto boots, to walk on ice) since. But I walked on ancient, elevated snow again – and with my amazing husband. Yay! 30 minutes, in 60mph winds. We nearly got blown off the darn glacier but it was awesome. The largest glacier in Europe! Which is receding. Because global warming.

One thing that was particularly fun about this glacier walk is that I got to know Crystèle, a French Canadian woman on our trip. We spoke in French -about soccer, Québécois comedy and Netflix – for a good part of the hike!

I rode a horse

Shall I munch on lupine? Or give Arah a taste of tölt?

For the first time since horse camp–when I was about 17. I’d gone every summer since forever. Why did I stop? College, I suppose. And my favorite female ranch hand was in a lot of back pain and spending a lot of time in chiropractic visits.

Mom rode an Icelandic horse, too! I think it may have been longer, for her but she handled her horse expertly. Steve did too! He and I both had horses who had the munchies for the greenery alongside the trail.

We were last in Iceland in 2014 and the weather kept us from signing up for a ride, then. But we finally made it happen, this time around, booking a morning at Íslenski Hesturinn– and Mom rode with us. Oh, I loved the 90-minute ride with my red (chestnut) Icelandic-horse friend, Sindri.

One thing that is unique about riding Icelandic horses is that they have a special gait that most other horses do not – a “tölt”. Our instructor Orsi gave us an hour’s worth of specific instructions for riding these horses, some of which were focused on how to encourage transition into this smooth prance. My horse went into it just fine – but it wasn’t until we’d returned to the paddock that I realized the tölt is midway between walk and trot – not faster than a trot! I hope I didn’t confuse the animal too much with my cues! I think my distaste for trot and love for the lope may have intervened a bit in my cueing.

Our guide, Sigurður “Siggi” Hróarsson’s first, or prior, career was in theater. Do I need to say more? If not: he had stories about the culture, the landscape, the history throughout the 6-day tour. Also: great tales from fellow travelers on our G Adventures “Best of Iceland” tour. Most were from the United States, but a few were from Australia, the UK and French Canada. People really do make the trip, and we are so glad we lucked out with great tour mates, and a gifted guide! 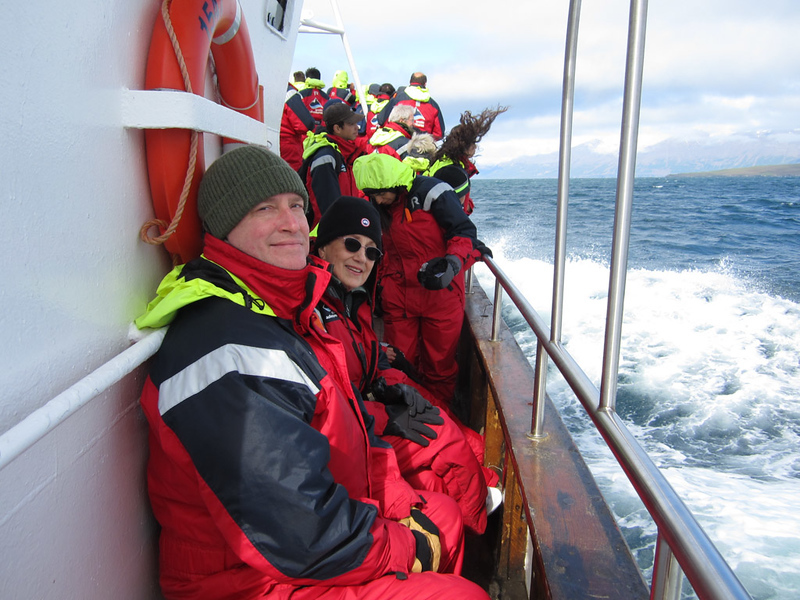 Waiting for the humpbacks to appear

This was an adventuresome, fun week with my mom, who has all kinds of stories. I’m pleased we could share the Iceland we knew with her, and to see other parts of the country for the first time, together!

My favorites, on the trip

I am in love with breakfast buffets in Iceland: A wide variety of high-quality, mostly cold foods, a pot of oatmeal and, of course, strong coffee. And yet: always a bottle of cod liver oil with some beautiful shot glasses for decanting.

The best part was not all that strange, but each guest house had a bowl of hard boiled eggs and every time they were too freaking hot to peel for at least 10 minutes. It forced me to sit still, after gathering my various plates of fruits, toasts, herring, smoked lamb, etc. and just sip coffee and be human with fellow travelers. Sometimes in silence (were we in Finland?), sometimes not.

At the end of our whale-chasing watching tour out of Dalvîk, Steve availed himself of the rods available and caught a cod! We ate it, about an hour later: as we returned to port and peeled off our insulated suites, our guide grilled up the various fish caught by passengers (Steve’s cod and a few pollock and haddock). We enjoyed it before piling back into the van like sardines. So. Damn. Good!

On the next-to-last day of the tour, we arrived at Reynisfjara Black Sands Beach, a very picturesque spot along the south coast. Dinner plans were there, at the beach and I was a little underwhelmed by the idea of having dinner at a beachside cabana. And yet this little cafe had the best beer we’d had in days, as well as ceiling-to-floor windows facing the sunset-tinted glittering black beach. I enjoyed some terrific lamb soup with fish and chips that I shared with Steve and Mom.

Dettifoss: Waterfall? Or gaping, frothing mouth of the planet?

We saw so many and got tired of them by the last day, but my favorite was Dettifoss, which defied description. Not vertical, not horizontal, not just basalt, not viewable from behind, not easy to drive up to, loud as hell. It was a Bosche painting. But also an M.C. Escher. But not Game of Thrones: this one was featured prominently in the Ridley Scott 2012 film, Prometheus.

A wee break from the tour-bus masses.

No cinder cone, no steam vents, nary a waterfall: Vatnsskarð. Just a vast expanse of Arctic. The view reminded me of one in Wyoming, a few years ago.

Itchy: everyone did this after the ride. Well, everyone with 4 legs.

In my teens, for a few weeks each summer, I spent a lot of time with horses in eastern Washington. And yet I never once saw them do what this band of horses did, once all the humans and saddles were removed: roll around in the dirt. Every single one of them. It wasn’t especially hot out, but our walk in the lava fields still warmed them up a bit. It looked like it felt really good!

Sindri, above, is definitely my favorite animal of the trip.

The task of every recently-arriving American traveler in Reykjavik is to park your bags with the concierge and find something to do until your room is ready. The city bus station has been upgraded in the last few years – it’s a fancy food court, now! Not too unlike the enclosed areas in Pike Place Market, for me. We walked over there from our hotel, and enjoyed a delicious meal of “lobster” soup. In Iceland, “lobster” usually means “langoustine,” which has been defined as “large, commercially viable prawn.” But you know what? Prawns need more respect. I love me some well-prepared shrimp, in almost any size!

Eyjafjörður, from our boat

My favorite day of our trip was the first day of the tour, as we drove out of town and began our big road trip around the island. The views from the van all day were amazing, though we didn’t get out for photos until lunch in Dalvîk. That morning, we drove under a fjord, via a new tunnel. The scenery changed a lot, and the view upon arrival at Eyjafjörður (pictured above) was breathtaking.

My new sling bag/purse – a Kavu Paxton pack. Of all the camera-bag solutions I’ve taken on trips, this worked the best: it held my digital SLR, with zoom lens attached, comfortably, plus my phone, wallet and lip balm. When I needed to use the zoom or phone, I just had to swing the bag around and unzip.

As on every trip to Iceland, I bought another wool knit hat However, this time I was on a mission to find a traditional sweater – the heavy kind that has a kind of sunburst pattern around the neck. They call this object a lopapeysa. After trying on too many itchy and poor-fitting ones at various stops on our trip, I finally found a beautiful hand-knit one at Rammagerdin.

I made my bed this way at home for the whole week following the trip.

At Borgarfjordur Eystri we stayed at Alfheimar. There, the owner had set up an electric keyboard in one corner of the dining room, and he sang Icelandic songs for the first part of our dinner! Anyone in the room who knew the songs

Above our bed in the room was a reindeer pelt – and we had a private entry with its own little clothesline – which we needed, as we still had wet suits from our visit to the Myvatn Nature Baths-a more affordable alternative to Blue Lagoon, which we visited while up in the north!

Olda, at Skuggi. This young gentleman was from the Czech Republic and had great stories, including some from his tour of the west-coast national parks in the U.S.! We enjoyed an hour, hanging out with him before we headed out for out last meal/prowl on Laugavegur.

These are all the points on the map:

Here they are, in a SmugMug gallery. Enjoy!