We’ve made it just 3 months into our objective of camping once a month for a whole year, and this time we got WET! Really wet. Ah, this brings me back to some memorable experiences:

Take my 5th grade class trip. The recipe included: Olympic peninsula, leaky platform tent, cotton sleeping bag. By morning, the idea of a sweat lodge – we were camping near a historical one – sounded quite lovely. I was profoundly soaked and chilled.

And finally, the 12th grade hike. Rain wasn’t really involved but again I struggled with foot moisture management, and had damp, blistered feet by the end of the 20-mile walk. Day two had another 20 miles in store for us, so I went to bed earlier than everyone else with hope that my feet would repair themselves, at least a little, overnight. This means I skipped the group campfire – a decision that no kid, not even a high school senior, would take lightly.

Thankfully, my hiking blister days have mostly come to an end and as such this September camp trip report offers nothing anywhere near as grim as my school stories! I give the invention of sock liners, then Smartwool (and similar) socks, and better-ventilated hiking boots credit for this. It’s also possible that a more conscientious and gradual breaking-in of hiking shoes is something I’ve finally figured out, over the years.

About that once-a-month thing: A few years ago, Steve and I read an inspiring story in the community paper, about two friends that had a standing monthly date with their tent/s and the outdoors. One of them passed away, and the still-living one wanted to honor his friend by continuing the tradition, even alone. We thought it was a meaningful, healthy and appealing tradition, and also a great way to lock in time together – during which we could make use of the outdoor gear that we had accumulated thus far.

And yet, it’s been a few years, possibly ten, since this story “inspired” us. The most we have managed has been a single trip in the summer or fall, some years. Once, we discovered that we had left the tent set up in the attic for a several … months. It was drying out from a damp outdoor night or two.

Life gets booked up and planning for a camp trip takes time. Harrowing work-weeks leave us exhausted on weekends. Marathon training plans fill up entire weeks of free time. 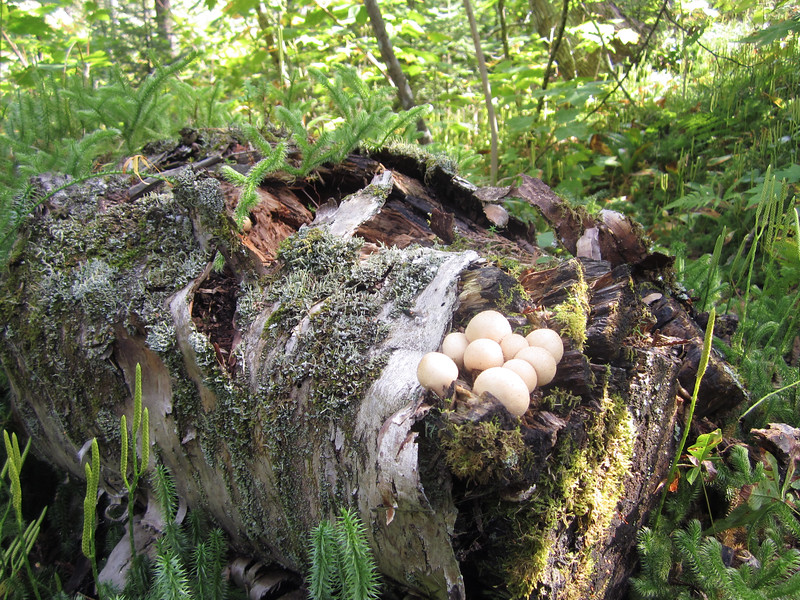 Some of us think a Yule log is a cake.

But not, it appears, this year. My running plans have been derailed by injury, and Steve has recently made a career choice that leaves him not so exhausted on Saturdays. Our discovery a few years ago of the JetBoil stove and decent freeze-dried meals has made planning so much easier.

And so, when we returned from our road trip to Montana this July, we felt new enthusiasm for getting outside, together, maybe even… every month. For a year! Even if it’s just in the metro area. We haven’t yet gotten to the nitty-gritty of the rules, but in my view they will go like this: a city line must be crossed. Sleeping bags and plans to sleep outdoors are required.

I began by making four campsite reservations. For one night, each. Most of them were in state parks located near Steve’s mom’s house, in the southeast part of Minnesota: we could drop by to visit her and her new dog Cooper, after camping.

A wee fuzzy one, nearly underfoot

We breezed through the July (Carley State Park-my photos are here) and August (Myre Big Island State Park-photos are here) editions. Prep for those was simple: wake up at a reasonable hour on Saturday, fill up the boot of the Countryman with gear, a change of clothes and a new dog toy, and then go. For one of them, we also picked up a bucket of ribs to enjoy as our campsite dinner.

This Labor Day weekend contained our September edition, and it involved a little more planning even though it was to be just one night of camping. The drive to the park was longer (4+ hours): we wanted to break it up with an overnight, visiting friends at their cabin, along the way. Additionally, the park offered only backpack-in sites, and we wanted to arrive early enough to do some additional hiking before the sun would set.

Our camping gear is lightweight and mostly smaller: designed for backpacking, so no changes to the big pile that would form in the middle of the TV room (our prep area). However, until this trip, we’ve simply tossed the pieces – including a large plastic bin for all the cook gear and small supplies like matches, beer coozies, etc.- into the car. If shlepping gear to the campsite on our backs was on the menu, we’d have to extract our big backpacks from deep, deep (AKA possibly moldy) storage in the basement or attic, then practice getting the right items into those packs.

Steve on the Manitou

We figured it all out, and things went great. Swimmingly, in fact, though no swimming was required at any point in this trip that ended up superdamp. Real swimming was, however, an option: during our hike, after we initially found our* campsite, we encountered a family taking a dip in the Manitou river. It was an unusually warm day for September, there. We’d been advised to bring fleece but the only time we needed it was inside Fitgers, where we stopped for lunch on the way home.

We opted out of the swimming, although seeing other campers compelled us to make sure we’d set up camp at the right site. I’d had the impression that every single campsite was reserved, and while there was a possibility that even the reserved sites would go unused, we wanted to be sure not to cause friction with anyone.

Our exploration further down the trail revealed that we had set up camp at the (*) wrong site. We had misread both maps we had on hand (the one printed from the website and also the one positioned at one of the trail intersections)! Each map was different, and the scale on each seemed inaccurate as well – twice before this we had gotten a little off track. Campsite #4, we discovered, was another quarter-mile down the same trail, following the river. We swiftly broke camp, then set it up again and celebrated our arrival again by enjoying two lovely cold canned beverages that we had brought along.

From the July edition: Cooper at play with Booty BootBoot

Overall, we got a good 12 hours of enjoying George H. Crosby Manitou Park in the sunshine and then open night sky. Even after enjoying lunch at the small lakeside picnic area, there was time to explore the nearby views – both expansive and nearly microscopic – and to capture several with my camera. There was even sufficient dead wood for us to build and enjoy a campfire as the sun went down. We didn’t see too many other people, though in the middle of the night a group passed by, headlamps and voices punctuating the night -and our sleep- like an ambulance siren. They were searching for an available campsite.

The wet of this trip started around two in the morning, and kept going until well after we’d arrived back at the car, around ten. Rain, thunder, lightning, massive condensation in the tent. Aside from the intermittent noise –and full bladders, once– waking us up, we were able to stay comfortable enough to sleep. The thunder and lightning, luckily, ended at about dawn.

Upon breaking camp in the morning, we discovered that a corner of the tent was sitting in a 1-inch deep pool of water that was about 2 feet in diameter – and this had created a pretty large pool within our tent, as well. Thankfully, our thick sleeping pads kept us dry, underneath! The tent vestibule – and the backpacks sitting in it – also fell victim to the puddle. Packing up to go was an exercise in speed, care and tolerance – anything that was miraculously dry would not stay dry, so all we could do was carefully stuff everything into the packs, and head toward the car. We had packed raincoats and the air was warm, so in terms of bodily comfort, we were fine. 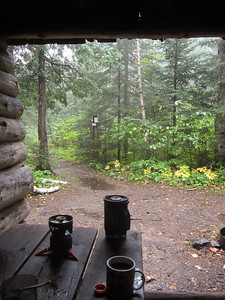 Along that trail – notably a stretch shared with the Superior Hiking Trail, we recalled, was a shelter that had a roof and counter. Before tearing down the tent, we had decided to blaze back and make our coffee and oatmeal there, rather than attempt to do it under no cover, at the campsite.

I had some fear, or maybe hope, that other campers had the same plan. I figured we’d have to share the space, and hopefully they’d be willing to share that as well as some stories. As it turned out, we had it to ourselves; several signs pointed to the notion that at that point, we had most of the park to ourselves, too. Ours was one of maybe four cars left! The lot was overfilled, the prior afternoon.

Best gear choice: My monster-sized Granite Gear pack. This is the first time I’ve used it since my scary experience in glacier-skills school about twelve years ago, so this experience was redeeming. Maybe even vindicating. That said, I finally understand why my instructor wasn’t fond of packs with this kind of complicated, not-just-a-tube design. I didn’t understand it back then because I was smart enough to LINE IT WITH A HEFTY BAG. (Oops.) The pack still fits! And hasn’t succumbed to mold, either.

Best thing I really wish we’d brought along: The smarts to not set up our tent in a spot that water would pool up. I think our car-camping has made me lazy!

Best experience at this park: No RVs. And an adorable frog.

Best part of the whole weekend: The park was great, but our visit with John and his amazing three kids, the prior night was both fun and, just a little, terrifying.

The October edition of Camp Every Month is coming up, near Halloween. We may get a chance to revisit “winter camping” on it, depending on the weather. For me, someone not raised in Minnesota, this means camping when there is the possibility or probability of snow. The last and only time we’ve tried to winter camp together was also in late October. In 2016, I’ve made sure not to pick a park with a ski area – and its snow-making guns – next door.