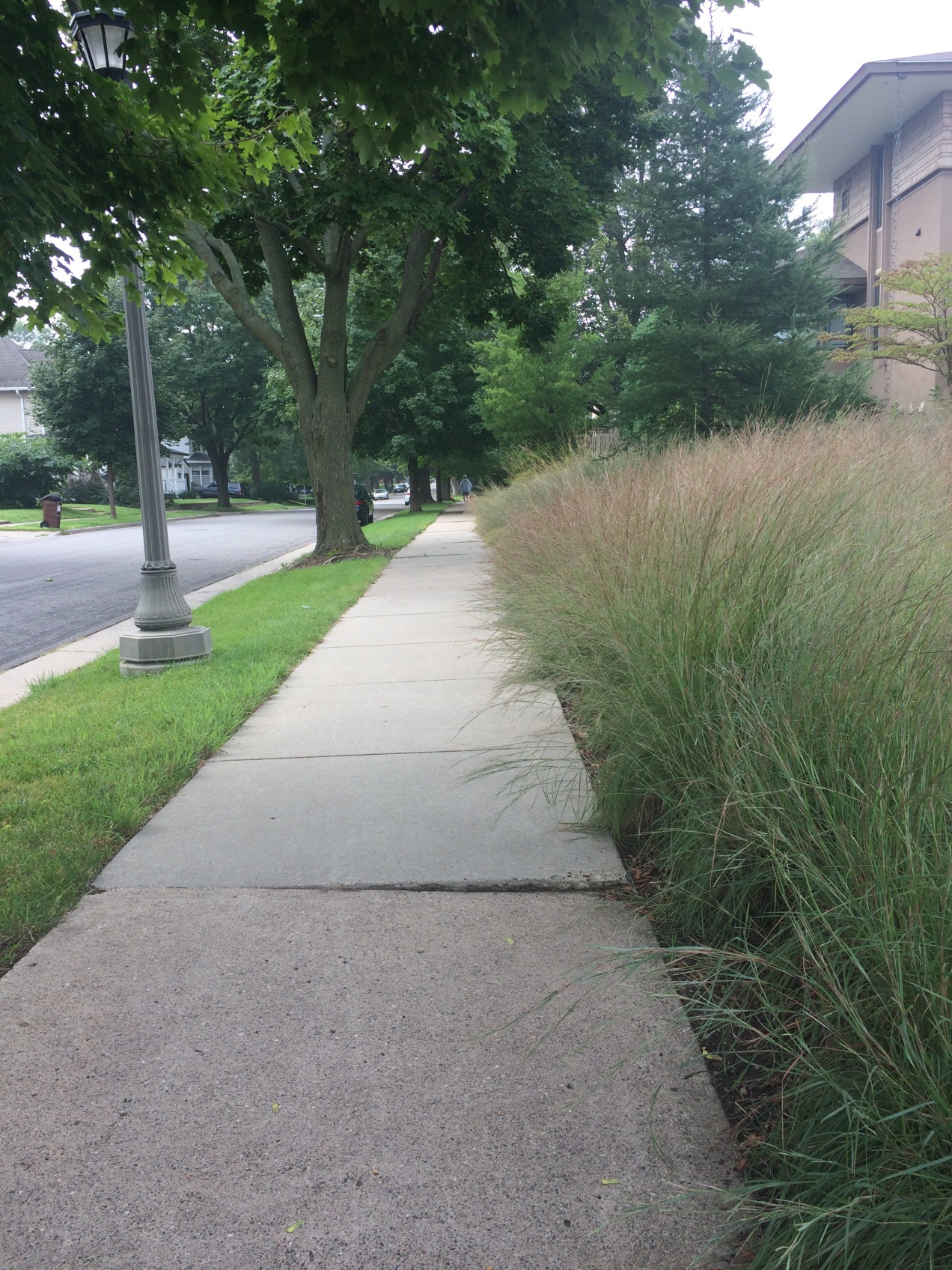 I may be in a position of wanting these lovely grasses, shown in a neighbor’s lovely landscaping, to be in my own yard

I took a trunkload of things to Play It Again Sports recently, hoping someone might find value in them. Some of these things I had owned for over 20 years. I had thought maybe I’d need them in the future (Rollerblades). Maybe a part of me still needed to hold them close, as a part of my identity (ice hockey skates and the cones I used for drills when coaching rugby). Maybe they needed to stick around, to remind me of a lesson they taught me (my skate-skiing gear).

And yet there they were, staring at me in the basement, collecting dust. Taking up space. Still on the too-long list of things I do with my time, even though I don’t do them, currently. Some of them moved with me to this house, and even to the prior several apartments. Some of those moves were epic in the volume of stress and sweat put out by me and/or my then-boyfriend to get everything from one place to another in less than four hours. Some of the moves were epic in the amount of love shown me by a few friends, who showed up to help.

Stuff. Things. None of them are actually needed to maintain or improve … me.

-Shel Silverstein, from “A Light in the Attic”

This poem I shared at the end of my Monday evening yoga class, last week. Perhaps less successfully than I’d hoped (it felt to be not so elegant a delivery, but at least it was authentic), I had invited students to consider setting a intention for the practice, of using just what is needed, and nothing more.

Upon further reflection: this is one way of looking at the yama of Aparigraha, or non-attachment.

If you are new to yamas: The Yoga Sutras of Patanjali is an ancient text -one of a few- that informs a lot of what yoga, in the larger sense, is. I’ve read a translation of it, and I admit to requiring and desiring a lot more study of it. Here’s what I have gleaned from study and discussion: In Patanjali’s Sutras, a student can find eight “limbs”, or guidelines, to living a meaningful and purposeful life. The first of those eight is the Yamas, which together with limb two, the Niyamas, form a list of principles that are in some ways (mostly thematically) similar to the Bible’s Ten Commandments. They are ethical recommendations as well as helpful pointers for self-discipline. I’ve found them useful for some self-reflection, now and then and sometimes I share these ruminations in written form (see Santosha/Niyama #2, or Satya/Yama #2).

The other six limbs get into physical practice a bit more, starting  with poses, and breath work. And then they kind of ascend (or descend, depending on your perspective and/or level of difficulty with them) into more complex, metaphysical-but-also-physical concepts and practices having to do with sensory withdrawal, focus, and meditation. The eighth is a sort of culmination of the rest- ultimately, a single personal experience, or maybe an ongoing one of feeling oneness with the universe. I humbly and curiously admit to no personal familiarity this one, called “samadhi”, or maybe I have familiarity and I haven’t known it. Perhaps some further practice and the perspective I have yet to gain will reveal it.

The limbs are numbered sequentially but with regards to practice or self-study, the order doesn’t seem to be of import, though number eight is a tough or rare one.

Back to Aparigraha: non-attachment. Or, freedom from wanting – from the compulsion to have. It’s true that there are things that enable some actions (i.e. sports equipment) that may bring happiness. But the things themselves? Not so much and in fact their continued presence and accumulation can be contribute to unhappiness.

In this post, I’m speaking a bit more about the stuff-I-own aspect of aparigraha, but there’s also the aspect relating to desiring things I don’t already have. And that may need to be addressed in a future post.

Whew. I am SO done with skate skiing.