When a fence appeals: it was 10 feet from the van.

When else is a van in the dark a good thing?*

It’s fun to reminisce with friends from afar who have also competed in a 200-mile relay.

My not-too-surprising main takeaway from this year’s experience running in Ragnar Relay Great River: prioritize rest/sleep. Maybe even above showering; certainly above food. Because: hot, hot summer. The van will smell, and your guts will get confused no matter what you do.

I clearly needed the rest because once it was over, I conked out for a record 15 hours. That heat (90 something in the day with pretty high humidity; 75 or so in the middle of the night)… oof, it took a lot out of me.

Soakers: save your runners and make new friends: everyone wins

Another item to remember for next summer: never join a Ragnar team van in Minnesota in August if said van doesn’t contain super soaker guns and people unafraid to use them. We had three such weapons/instruments of heat stroke banishment.

Atop this post is a shot of my little nest outside Ellsworth High School, during rest 1 (of 2). I got little sleep but at least I got to stretch out a bit, do an Eka Pada Rajakapotasana or two, rest my eyes (most helpful were earplugs and a buff to pull over my eyes, to block out parking lot distractions), and send a friend a text remarking on the surprisingly high number of crossfitters doing the relay this year (her response: “are you that surprised?”). I was not, but in the porta-potty line earlier that day, I overheard this and compared to prior years, it was unusual: “oh, my god so I did this snatch on Wednesday and then on Thursday I was so sore and I was like shoot, I messed up Ragnar…” 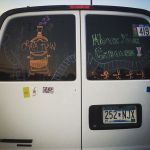 Our van art was good, but this team took it to another level. Pro tip: chalk pens wash off of windows very easily.

Another thing that struck me this year, sadly at a moment when I did not have a camera at the ready: it truly is a bizarre sight to walk around the perimeter of a high school at around dawn and see at least half of the ground surfaces (grass, tennis courts, sidewalks) littered with human beings arrayed (each alone) in an amazing variety of positions and entanglements with sleeping bags or blankets. It was like a flash mob of narcoleptics. Or a nonfatal zombie apocalypse.

Rest #2 Accommodation: YESSS the best 58 minutes of sleep EVER.

Despite the heat, it was a great time (again) and we performed surprisingly well-32nd place out of 421 teams! With no injuries nor heat-related problems, either. Bonus: more of our team – maybe even all of us – were able to hang around for the free beer and pizza.

A day or two after the race I quite seriously suggested we consider doing Ragnar Antarctica, if it’s ever invented. But if we place this well in heat, why the heck bail on an August relay if it is reasonably cool, almost every other year? Go Team Loo Lovers: 7 years and counting!

* For the uninitiated: during the night part of a relay, a runner’s van stays pretty close to the runner, giving support a little more frequently and quietly than during the daytime parts. Such support can come in the form of verbal encouragement, hydration, non-broken blinkie lights, and general assurances that monsters won’t pop out to surprise her in the dark. Also vital, especially in Hudson, Wisconsin: the support van can also to make sure she stays on course.