Fail sauce on my chest sticker.

My cell phone rang just as I’d found Steve in the finish line area – about 40 minutes after I’d crossed the finish line. Dad was calling to congratulate me on my finish of the Medtronic Twin Cities Marathon, and ask me how I was feeling. He also asked if, at that point, I felt like I wanted to do a marathon again.

I told him to ask me again in a week. I was feeling pretty good, but throughout training for (and deciding to commit to) this race, it’s been the race recovery experience that had me worried.

I did have a good time doing my first marathon, and at that point (and today, as well) I was feeling like it was worth all the time, money, stress and Body Glide. Things went as well as I expected, and certainly way better than I feared.

I nailed my rough goal of 4:20, which beat my newbie “just finish” goal by an hour and 40 minutes, and missed my foolish dalliance with this idea: “damn, my training paces indicate that it’s possible that I could qualify for Boston.” If I were that arrogant. As if I didn’t have enough to think about already. I don’t even like the town of Boston, that much, and anyway I prefer running on trails. When I looked at my watch, more than 3 miles from the finish line, and saw that that my qualifying time (BQ) was about 5 minutes away (and thus impossible), I was immensely relieved. I’d been enjoying it but once that stressor was removed, I really started to enjoy it – and at that point I was pretty uncomfortable, too.

I went to the Expo the day before the race, to pick up my packet and maybe do a little shopping. I’d been to this event before, and enjoyed the festive, energetic atmosphere, sweet deals on running gear, and running talks. Maybe I’d run into a friend? This year, however, I was a nervous wreck there! So many things were running through my mind. I was a little nauseous, either from the frayed nerves or from the too-rich dessert I’d had the night before. I got the packet, snagged one freebie and said hello to a few people I knew, then headed home, on foot.

By the time the starting gun went off, I was so much calmer, which was surprising. Maybe at that point there were so few decisions to make, relatively speaking, that I just had to, well, run with it?

This was a good state to be in, because my plan to use my heart-rate readings as a guide for pace ran into a little complication: that morning I’d had success putting in my contacts… but I’d forgotten that I can’t read tiny text while wearing those contacts (I don’t wear them often: only on climbing excursions and some races). Well, I can read the number, but not if my arm is moving swiftly and I also have to navigate a sea of fellow runners. For the third race in 2 months, I’ve been forced to find my pace by feel (at the other 2, the GPS function of the watch wasn’t working, nor was the heart rate receiver). This has been my first running season with a GPS watch, so perhaps I needed to continue follow my body’s signals, not anything coming from a gleaming screen. 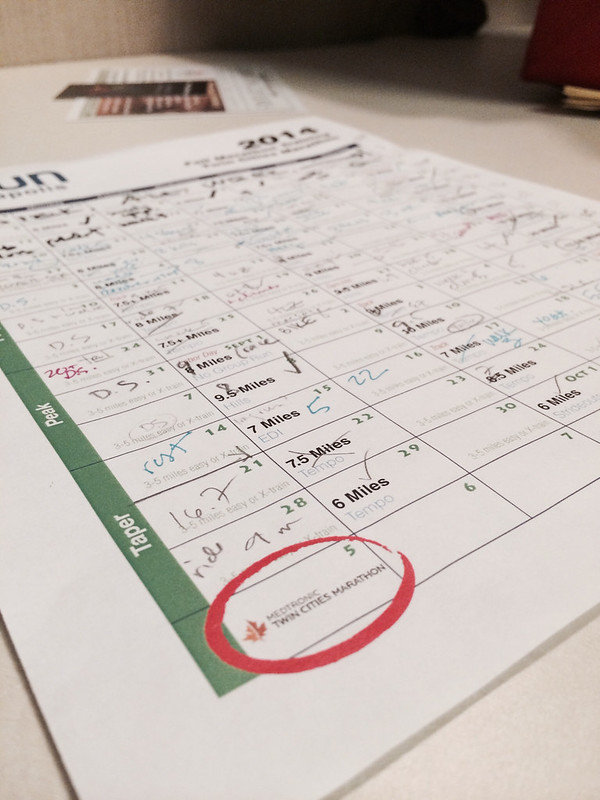 Around mile 5 or so I discovered that I was near several of my Club Run teammates – all of whom I had reason to believe are faster marathon runners than I am. I got a little nervous that I’d started out too fast, but then left it at that. I bid a good race to them, and continued maintain my pace, pretty much until I’d arrived in Saint Paul, about 20 miles in. I also continued to allow people to pass me at least until the halfway mark, as advised by a few veteran TC Marathoners.

At miles 8, 9 and 11 I found Steve, Becky, Tara and other friends, cheering on the sidelines. I held back an unexpected sob after I hugged Steve. It was going well, but… well, this runs in the family. I was overcome with everything going on. Happy! I kept moving. This was my sole sob of the whole day, surprisingly!

I rolled my ankle in a pothole at around mile 18, but after walking around a tree on the boulevard and swearing a little, I got back on the course, on pace. Thank heavens for rubber (AKA sprained at least thrice, each) ankles, I suppose.

I approached the famous 20-mile marathon “wall” and was humored to find that there was a big inflatable stone wall (arch) over the course, erected by one of the local running clubs. Otherwise I didn’t really sense that mythical marathon “wall” of massively increased difficulty. Looking back at my splits, this is likely because I’d already started to slow my pace a little – as early as mile 13. Well, isn’t that interesting.

Around mile 22 or so was the aforementioned No-BQ moment. Sure, we were in the last few miles of this beast anyway, but if I’d have known that the race may have been even more fun, or at least a lot less stressful, had I never looked up what time I’d need to qualify, I’d have never done it. Bah! Can’t take the runner out of the runner.

Where things did start to get more difficult, though still manageable, was around mile 23. That was in the middle of some hill-climbing, and I’d wound up with a side stitch that stuck with me until the finish. I stopped to walk a few times in those last few miles, but just a few steps, maybe 10 or so, each time. At times I managed to ignore the side stitch, mainly when I’d encountered a friend on the sidelines, or later, Kristin –one of the aforementioned speedy Club Run women– who apparently was having a rougher day than expected on the course. She and I got running again together, and ran across the finish line together.

Things that I will do differently on race day, should a “next time” happen: 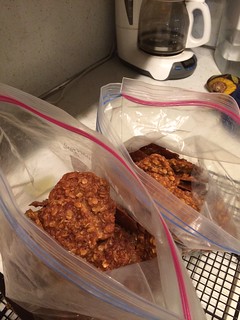 ANZAC Bikkies: runner fuel that did not fit into my waist pack, but did fit into a Ragnar Relay van in August.

Things went very well! I have so many people to thank, mostly for their patience with me these past 6+ months but also their expertise, technology, inspiration and … love. A marathon surfaced as a specific goal for me pretty recently (let’s say March this year) but it was this year’s version of “I must accomplish something physically difficult” and as such I attacked it with ferocious intention: 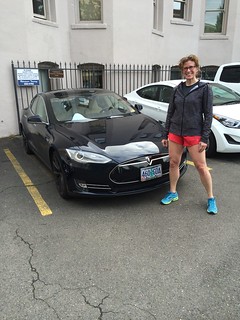 Fast – or at least stylish – as Tesla in my Mizunos, earlier in my training

Stay tuned. But I have already committed to a relay with Team Smellstrong: the Tuna Run, in North Carolina, in mid-October 2015!