Vacations for me usually include at least two of the items below: 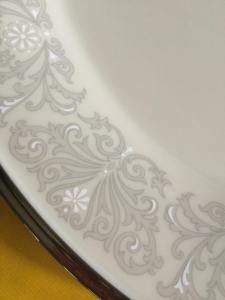 This summer, Steve and I opted for a road trip mainly because we got a new car. New automobiles are better than old automobiles for trips, at least from a potential for problems standpoint, right? This turned out to be true.

And then, when we decided how far we planned to drive, it also became a trip to see Mom and retrieve the set of china that she had set aside for me, which she would not trust to any shipper because a) it’s beautiful and b) I helped choose the pattern way, way back when I was wee and wasn’t as well equipped to prepare food to put onto the plates.

I’m pleased to observe that at that tender age, I already had good taste: I still love the pattern and a few friends who have seen the shot (shown here) agree that it’s a nice one. I guess we’d better find room to store it and, more importantly, throw an event in which to use the china and the crystal punch bowl that also made the trip back to Minnesota!

The things in between Minnesota and Oregon, any way you drive it, were bound to be interesting, so about a month ahead of the trip, I stopped by the local AAA travel office and got a great route planned for us by the friendly consultant there.  In retrospect, I’ll offer this note of advice: if you want up-to-date road closure info, get your TripTik within just a few weeks of your trip. Apparently, summer is not just construction season in Minnesota, it’s also especially true in North Dakota and in a few other spots out in the American West. Fortunately, we were never in a time crunch and we had plenty of entertainment and foodstuffs.

What I told her: we have two weeks. We need to get to the Oregon coast by July 4. We’d like to hit Custer, South Dakota and Park City, Utah to visit relatives. We want to visit Great Basin National Park, because Backpacker magazine did a great write-up on it (which included the fact that it didn’t get a lot of traffic: a plus in our book) and plus it’s Mom’s favorite national park. We have friends in Portland and Fargo. We plan to camp for some of this trip, where there is enjoyable camping. We’d love to visit more than one national park or monument. Some hiking would be great.

Here’s a great interactive map, to give you an idea of the itinerary that resulted. We strayed just a tiny bit from the TripTik, mostly at the end, with a visit to Itasca State Park, because we had time, we had camp food, and I’ve always wanted to visit that park.

The maps should give you a feel for the sequence of things (we started off on the southern route), so I’ll arrange this recap as a list of highlights, instead.

That’s about it, for my trip story. I hope you enjoyed the reading and pictures! More photos can be viewed here on a SmugMug gallery.