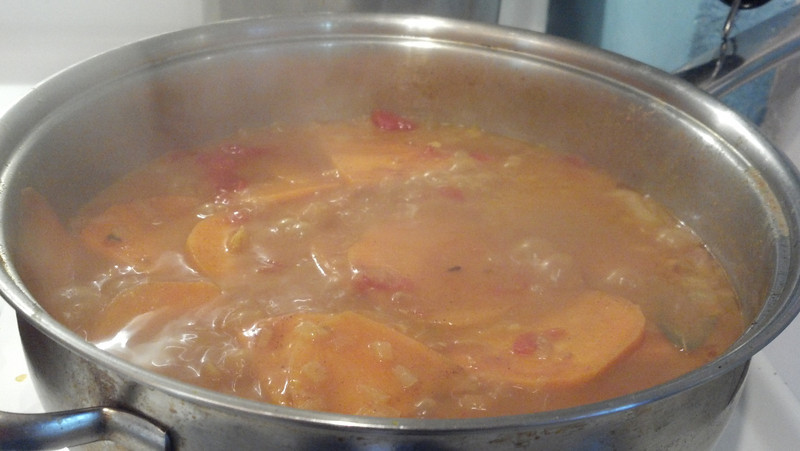 Sadly, my food photography recently has not been a beautiful thing. On my project list is a light tent, that will enable me to shoot better photos than this. That said, it’s composed poorly, too: I was in a hurry to eat. Perfect: I’ve been looking for an opportunity to share a beautiful photo that my husband took of a moth, when we were in Mexico recently.

The other beautiful thing on my mind: cooking with a group of friends. Steve and I cook together fairly often, and yet this last Sunday night’s meal had more in common with the few cooking “parties” in which I’ve participated. This was likely due to the fact that we were attempting to bring three dishes to the table, simultaneously. Ah, the over-committed American folly: we need to learn to eat like Italians, and take all afternoon to do it. Sequential courses, not simultaneous ones.

What’s so great about cooking with a group of friends?  When you have a big enough kitchen, coming together with a menu, the ingredients, then preparing and eating that meal together can be a great way to connect with people, and also to connect with your food. While on our our ski trip to the Methow Valley this past winter, we got to do this: five of us assembled several hearty meals (including an unplanned and parsley-heavy one) together. You think you know someone, until they choose and prepare food for you. Suddenly a richness of menu or dietary decisions, culinary background, and food enthusiasms is revealed. Throw in a board or card game at the end, and you’re in for an evening in which time both zips and creeps by – and you go to bed feeling nourished in the belly and in the spirit. I need to cook with more friends, more often.

A side note on our recent menu: it was from a new cookbook. The three recipes were all part of one menu composed by Bryant Terry in his recent cookbook, The Inspired Vegan. The cookbook is a great read – as with each of those composed menus, he tells a story which can give context to the menu components. He also provides a playlist for each menu, which has been gratifying for two reasons: we find new, awesome music, and sometimes we find that we already have it in our collection – so we’re possibly almost as cool as Mr. Terry. So far we’ve tried 5 recipes from the book. It’s great and will undoubtedly help get more veggies into our meals.