Thanksgiving tradition of a run:✔️ Rollo’s first 5k: 🐩 Trail adventure with my friend Chris (behind the camera, and wearing a fab dayglo yellow Brooks jacket because fog):🌲 Between the three of us, we wore the rainbow: 🌈. A stylish and happy crew! Thx @enduranceunited for another fun and well-executed event! #turkeydaytrailtrot
Squeezing in a last daylight walk, today. Rollo got such an awesome but short cut today that I wanted to put a coat on him for warmth! C is still sporting his Cute Feet from a groom last week. He is, after all, half Poods. Thx, @thepersianmastiff for the TLC and excellent grooms!! #solsticein29days
Finding it. RPE 8! Also: good choons, red, satisfaction, a place to wear shorts in a MN winter. #strength
Away from our MN fridge for 6 weeks. Can’t recall what this was, but today it’s a very colorful (and fuzzy) … salsa? #shoulditkeepgoing #justcoveritbackup
An amazeballs road trip lunch, even when consumed in the car because: doggos in the car. “Beirut” sammy and yucca fries are a lovely welcome back to the Midwest! Thank you, @cafe_beaudelaire!
Such focus! Getting it done. 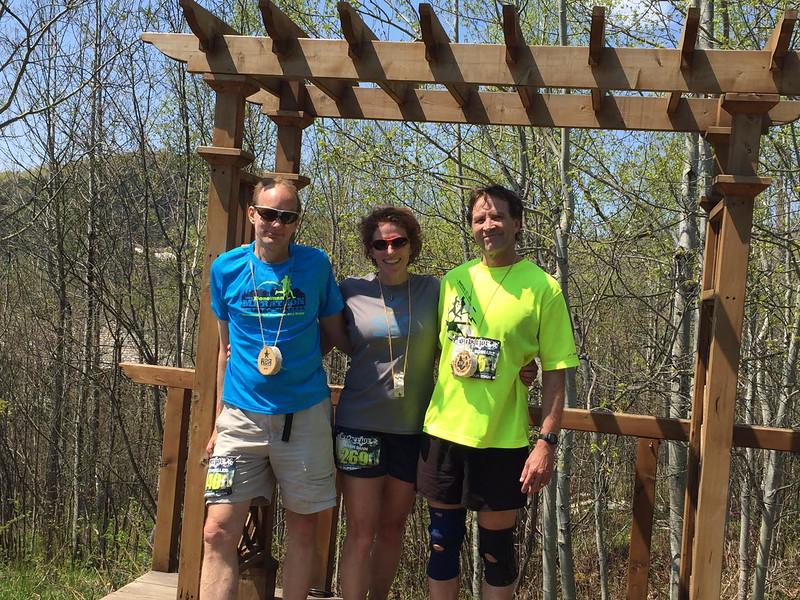 Why do we do this?

This was a question asked around the living room, on the eve of our event. The  next morning at 8 o’clock, we’d be toeing the starting line at the Superior Spring 25k Trail Race (SS25k), up along the rugged Superior Hiking Trail, north of Duluth.

The answers were none too surprising, as this posse was gathered in the same room last June, and we were then about to run Grandma’s Marathon.  There was at least one “I need to test myself, to find out what I can do” to “running just feels good.” I can’t help but smile when I’m trail running.

“It’s fun” was also bandied about. We were about to spend time outside, doing something that not very many other people will do. We could count on getting amazed by the beauty in this part of the country and also by the relentless challenges that the trail was likely to present. It’s the ultimate antidote for the conformity, scheduling rigors, and stifled wanderlust of adulthood. It’s not multitasking.

The SS25k was something I’d been desiring to do for a few years, though I kept back-burnering it for this or that reason. Namely: winter often deals a nasty hand to people trying to put long miles in to prep for a May trail distance event. I’ve done 25k’s in April, July, September and October and while my PR was in the April one, it was on a flat course.

This particular 25k deals a nasty hand right back: do all that winter and early spring training, especially in an icy, blistering cold year, maybe even log some tortuously boring treadmill miles, and you may acquire the toughness training to handle much of what the event will throw at you. “Handle” for me was to finish, intact, and smiling. That’s all. There’s no way I’d PR anyway, knowing the course’s elevation profile.

A few friends were thinking about signing up, too.

Late last year, after 18 months of mostly road racing,  I wanted to plan something different for 2016, running wise. My big events had been two marathons and three relays. Roughly the same minutes on course was appealing (from a training perspective), but I yearned to move over softer surfaces, have access to new course scenery and a different kind of challenge than endless flat pounding and exploring the impact of sleep deprivation on muscle and brain function.

Me, a big lake and a very May level of shade on the North Shore

It seemed a perfect fit: I entered the registration lottery for SS25k in January. A few weeks later, Allen, Dave, Karen, Mike and I got in!

Then, I built up time on trails on weekends over several months, getting up to, but not past 2.75 hours, about a month ago. I had hoped to log at least 2 runs that lasted well over three hours, but various schedule struggles as well as a foot injury 3 weeks ago kept that from happening. I chose to rest, hoping that all the months and all the midweek hills workouts would fill the gaps so that I’d be able to finish and enjoy this 25k.

My strength training was limited to my daily home yoga practice and 1-2x per week working the walls at Vertical Endeavors climbing gym. This provided not super specific training  for running, but it provided some degree of complementary (i.e., pull vs. push, upper vs. lower body) muscle training. And maybe my dogged nightly ritual of forearm balance would prove more helpful than I perceived, in terms of stamina and running stability.

My plan for toughness training beyond the long runs on trails was fairly minimal: Get up at o-dark thirty to run paved, spottily icy hills, every week or so. I decided to buy some carbide-studded shoes for it, largely influenced by my fall on icy trails last winter. I did not desire to replay the concussion and stitches experience!

My hill run buddies were more than pleasant so perhaps it could have been taken further, for optimal preparation. Options might include: Do it naked? Forgo coffee, afterward? Do it … alone? Do it more often than every 10 days?

NAHHH. Perhaps the emotional challenges of the last few months, outside of my running life, could fill in the gaps.

So, how did it go? In brief: the race was tough, but overall I had a good time. I might do it again, but I think I’d prefer to see that trail again as a hiker.

Maybe not “epic,” but… (Strava’s take on my heart’s performance)

The air temperature was in the mid-60’s (ºF), climbing into high 70s for some of the 50k runners who were on the trail past noon. And it was sunny. This was warmer than expected! I refilled at the midway point (7.5 miles) aid station but in retrospect, I should have taken on more water while still there, after snacking a bit on carbs and salty pretzels. At around mile 10, I was out of water and I wasn’t sweating as perceptibly as usual. I hadn’t been watching my heart rate readings on my watch, but I was concerned that my focus would wane and my reflexes (for avoiding trips) would slow down. So I walked a fair amount on the return trip.

Since we had heard reports indicating the trail was dry, we figured mosquitos wouldn’t be a problem. I applied bug dope just down on my lower legs, in case of ticks. However, black flies were buzzing around my arms and ears, when the light wind wasn’t blowing them away. Some were biting.

The two-way traffic (of the faster 25k runners and 4 fastest 50k runners) kinda got to me. People were super friendly and we all managed to safely navigate around each other, but on a few of those opportunities, I got overwhelmed by juggling root and rock watch, runner ahead watch, and runner behind watch. I’ll have to run faster next time! Or choose a different event. Or just keep on trail running in smaller groups.

I expected the trail to be challenging terrain, and it delivered:

The first time I stopped to take in the view, take a photo and take a breather from the conga line was on the return leg. I overheard another woman’s reaction to finishing the same climb: “Holy crap!” Mine, about 3/4 the way up when I passed another runner was, “Well, that didn’t seem so steep on the way down!” This was maybe 9 miles into the 15.1 mile course. The stretch we had just completed involved a 500-foot gain in elevation, spread over .9 miles!

I was also struggling, maybe more in an emotional way, with my foot injury. On race day, my worries about it were at least twofold. How far will I get? If I must DNF, how much hassle is it for someone to help me if needed? And will I injure the foot further?

Smiling, and not just for the camera (thanks Allen for the pic!)

The trail was drier than on most years and I’m told that was a good thing-there were few muddy spots, which meant less opportunity for related injuries (sliding into trees, twisting knees, encountering unseen sharp rocks, etc.). I was a little disappointed in how clean I looked at the finish line! A shower soon thereafter proved satisfying, nonetheless.

This was a very well-run event, as expected. Race Director John Storkamp awarded me my medal & gave me a special thank-you as I volunteer at his races more often than I run in them.

Everyone was friendly! That helped a lot, as we were all on the same singletrack trail and sometimes, passing had to happen (see above).

While the friends with whom I drove up weren’t running with me (two are faster runners and the other two were sidelined by recent injuries), they were all very supportive before, at the aid station, and after the event.

Additionally: it may have been warm but after our typical long winter, it was wonderful to have a sunny day! I’m sure this helped make the finish line area such a festive, celebratory area. When I arrived, I accepted the lemonade offered by a very young and awesome volunteer, then sought shade and a good vantage point from which to locate my friends and to see more racers come across the finish line.

Where to go from here

I finished in just under four hours. Even before the foot injury, I expected to take four hours or more, though the Ultasignup.com bot predicted a 3:30 finish for me. When I got back to Lutsen and saw that I’d finish within 4 hours, that made my day – my foot and thirst had me suspecting a late finish. Allen and Chris weren’t kidding when they told me that I’d be doing a lot of walking even if things were going well.

Even if I didn’t have a foot that needs babying, I’m glad my plan for the next few months is to train for and enjoy some hiking on a trip in Montana in July. More than once on the Superior Hiking Trail, I thought it may have been nice to be moving more slowly, so I could stop and check out the wildflowers or to appreciate the terrific view of the beautiful lake & majestic north woods.

One thought on “Superior 25k Trail Race: Some kind of epic”