I tend to get greedy when it comes to making changes. Joining a running club while also trying to change my running gait has proven to be mainly … confusing.

My marathon is 5+ months away, so I fall into the middle-distance group for training runs. I’ve been working on increasing my stride rate for several weeks now, so it’s almost become second nature for me to keep trying to move my legs faster. On long group run days, when I need to be running slower, this faster leg movement pattern seems to be taking me away from that group, by making me faster. I think this is the end goal, but I feel like I need to get a better gauge on how hard my heart is working to make my legs move faster. More on this, later in this post. I may try to ditch the stride work, on this weekend’s long run of 9-10 miles. 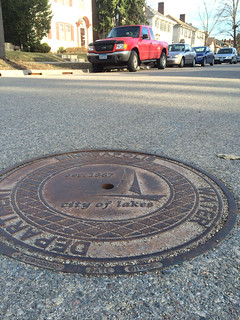 I hope it’s this sunny for my next Minneapolis run.

Then, there’s the devices. For someone who held out on running with a GPS for a long time, I’m awfully dependent on gadgets, these days. For Monday’s tempo run, my iPhone was out of juice, and I didn’t have my Ironman watch with me, so I used my iPod touch and some rough estimations I’d made from MapMyRun, earlier in the day. This arrangement involved a lot of touchscreen fumbling and ended up telling me what was obvious: I ran the middle part of my run faster.

For yesterday’s “easy” run I attempted to track my heart rate, to see if my effort level with a faster turnover (stride rate) is, in fact, lower, but the darn chest strap was too loose and I ended up taking it off so that fussing with it didn’t ruin the run itself. My average pace, taking the big uphill and return trip downhill into consideration? 9:42.

It should have been more like 11:00 per mile, at least according to calculators like this. It didn’t feel like that tough of a run, though my glutes are saying otherwise, right now.

RunKeeper tells me my average stride rate was still under 160, but the chart indicates that I spent a lot of time above that. Is there any turning back? There probably needs to be some simplification, if I want useful data, anyway. I’m looking forward again to some simple hill work with my climbing buddies tomorrow morning. Possibly with just my watch, to track the  overall time.

Outside of these pace troubles, running with this club has been a good idea, so far. I’ve met some nice people, gotten some helpful advice, even on the stride rate front, and it’s been a worthy adventure, checking out some new running routes in the west metro. Last Saturday’s run had me on Wirth Parkway, where the photo at the top of this post was taken. Last Wednesday, with the group I discovered a good hill circuit over by the Walker Art Center.

Have you ever tried to change your stride rate? How has it gone for you? Please share in this post’s comments, as I’d love some feedback or advice.

Mostly unrelated, but tunes are always good: below are some music and mylar for you. John Fahey’s “America” is sampled in the video, which I filmed right after one of my classes. The mylar was put there by co-workers, to track and dissuade a robin from attacking the shiny window. It seems to be working! And, the light play resulting on the walls was surprisingly soothing, kind of like sitting next to a quiet pond.