It could be a submarine for very tiny Beatles

I think I need a samovar.

This was my thought a few hours ago, when my teacup was empty for the second time since my movie started. Running upstairs 5 times during a 1.5 hour movie to get more tea isn’t helping me achieve the goal of keeping energy expenditure to a minimum. I’ve done everything else I can think of to try and get better: I’m on day 12 of this bugger of a head cold. I’ve decided to stay home from work and I am not even attempting to work remotely. I was parked in front of a TV that was playing a wonderful comedy: perhaps the laughter will be an extra healing bonus? It would be so much better to have a large container of tea-temperature water right down there with me next to the sofa.

Ah well. Hey, I’m on a losing-weight trend, this past week. Why not boost it with a few more steps? This was not my intention, truly. (I’ll pack a thermos next time.)

A samovar made of tombac: an alloy of copper and zinc.

So, a few weeks ago I went to the Museum of Russian Art to check out a show of samovars. Earlier this fall, I went to a tea ceremony, during which another fellow tea fan mentioned the show. I’m not sure what it is about samovars, but they fascinate me, even the first ones I saw, which weren’t in any way attractive: I think I was at a conference and bad hotel coffee was being served from the huge chrome cylinders in a lobby and somewhere they were labeled as samovars: such an elegant, foreign-sounding word for such an ordinary-seeming hotel appliance. It rolls off the tongue more pleasurably than “coffee urn”.

So I planned my visit to the museum, wondering a little why a coffee maker would star in an art show in a Russian institution. I vaguely understood that Russians were historically a little more into tea.

So, I was right: tea is generally the hot drink of choice in Russia and has been for awhile. I had been misled by some earnest hotel interiors stylist. These objects were wonderful! A room full of finely-crafted shiny things, displayed smartly upon colorful, homey-looking fabrics, and also surrounded by various typical dining-room textiles, tea accoutrements, and paintings that included or featured a samovar. There was even a brick of tea, which looked a lot more brick than tea, but it was molded with a beautiful design. Cyrillic may not have the sexy curls that Arabic does, but it’s still more enjoyable to look at that the Roman alphabet. 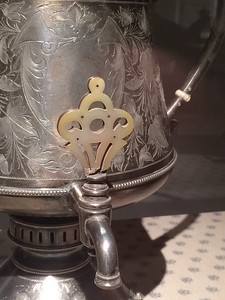 One of my favorite spigots

While there I developed a fondness for something I previously never knew existed: samovar spigot designs. There was a shape common to several of them, a sort of fleur-de-lis, cut in half and flipped back upon itself. However, several designs deviated from this, either in a adorable direction (be it a head of a goat, a serpent/dragon, or a gnome-like creature), or into a more delicate direction, using mother-of-pearl.

Having a samovar on or near your kitchen table would be a great way to linger over conversation, or your on thoughts, and to slow this way too busy life down, just a little. Why doesn’t our culture have something similar?

I remember the strange burple of the plastic hot water kettle that my college first-year roommate had; I never had seen even one of those until then. However, it would boil, and you would turn it off ad make your tea/coffee/ramen. Stop, go, stop. These gleaming “self-cookers” contained a slow-burning fire that kept a decent amount of water at tea temperature. Some of them also had a tea-brewing component.

Stitch detail on a tablecloth

Most of the items in the show were from the 19th century. There were a few examples that were made small as event souvenirs, as well as one “traveling” version which had legs that could be detached, for packing. As elegant as I think our JetBoil is, it’ll never seem as genteel as setting one of these beauties on a picnic table in a campground in a Wyoming Canyon. But would it fit into the boot of the Mini, alongside 75 pounds of china and a crystal punchbowl and our camping gear? Perhaps not. But then, when camping you often have the option of keeping a nice, big, slow campfire. Pretty much a samovar with out that complicated (or not) tea prep.

The show is open until January 24: it’s worth a trip over to South Minneapolis if you’re in the area. If you would like to see more of my photos (I did not shoot all of the samovars), here’s an online gallery.

One thought on “Big shiny things on Russian tables”