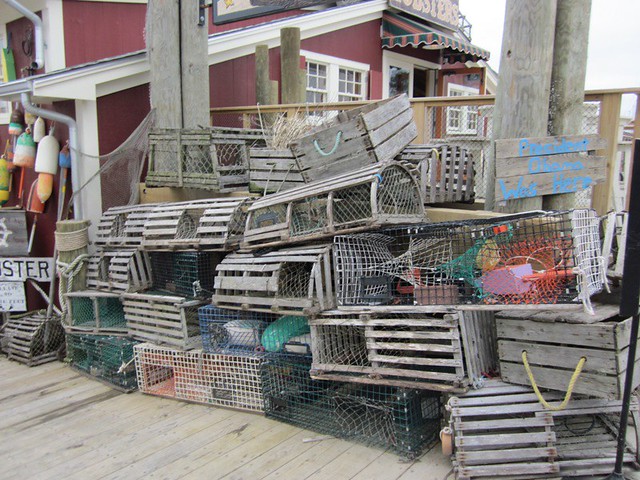 Above is one search result when you are me and you do a search of your Flickr images on the term “bar”. More shenanigans with places and food can be seen on the results page, here: it’s a nice reminder that I do get around, both in my kitchen and around the world.

Alas, today I’d like to share some results on a recent cooking adventure involving bars. The lobster traps above are more photogenic than the bars in question, so they get top billing.

I normally keep the cookie jar full of biscotti (cantucci if you’re Italian and you make the cookies very small), as Steve and I like to have a little sweet crunch with our coffee in the morning. I’ve made so many biscotti over the last few years that I am finally willing to experiment with recipes. In fact, with biscotti recipes I always modify the flour part, so that it’s half regular flour, and half whole-wheat pastry flour, which I do to try and replicate the superfine texture in real Italian cookies. Note: Real Italian Cookies of this kind can now be found at the Cossetta Pasticceria in Saint Paul. They are delicious and plentiful in variety.

Back to the non-Italian cookie story: This is a summer of a lot of endurance activity and slightly heightened awareness about the ingredients of the food I’m using to fuel up my training. Lately, the cookie jar has seen less action, because my experimental time in the kitchen has been hijacked by bar production (and I store the bars in the fridge).

A few years ago, I found a great recipe for energy bars, on Winnipeg Cycle Chick’s website (link to it is below). Thank heavens for Canadian women who bike! Steve, my brother and sister-in-law and I took a double batch with us, when we hiked the Grand Canyon, rim to same rim, a few years back. These made for very packable, good and tasty calories (and protein), they were. We also took a Costco-sized bag of Jerky, and a few other edible items, of course.

One thing I love about the recipe is that I almost never need to buy anything new, to make it. In fact, for my most recent batch, I did, and to a small degree I regret it (the item in question: Rice Syrup, which seems sweeter than corn syrup, at least in this batch, and is very, very sticky).

Another thing I love about the recipe: the oven isn’t needed, so they come together very quickly. They do need to set in the fridge for a spell, but very little extra heat will be added to your July kitchen, making these: yay!

The last two batches we made have been very good. I’m posting the better one of the two here, to help my own memory in a few days when I make another batch, but also perhaps to help you, with your bar-making efforts.

Note: I usually do a half-batch, as indicated below, as with that volume I’m more likely to have enough nut butter and binder syrup around. It also takes a lot of energy to cut up the bars (maybe I should let them warm up first, eh?), so a half batch seems less intimidating for me.

Steve has had one of these for breakfast almost every morning, the last two weeks. I reserve them for a semi-meal on the go, or for recovery fuel after a tough run.

Some additional notes I can share, as we’ve made these nearly 10 times with some less-than-success stories: adding protein powder has never been worth it… the taste isn’t great and the powder will often make the bars too crumbly. Hemp hearts/seeds work a lot better for injecting a little more protein in. Cereals in flake or flat-shape form work a lot better than … other more voluminous-shaped dry cereals. I add the chocolate forms at the end, as adding them to the warm syrup mixture makes a really hard-to-handle mess. Chocolate chips seem to work best, though I’ve tried crushed-up malted milk balls (I blame the Vitamix for the powdery mess) and hand-crushed toffee/chocolate bars. Powderly stuff like wheat germ or flax meal is good, but only in small quantities, around 1/3 cup. Don’t try mini-marshmallows or corn puff cereal. Just … don’t. I like adding coconut, but darn if I can ever taste it. Maybe I need to add more??

Directions for assembly are here. I use an 8×8 pan for this half-batch, and cut it into 16 squares.