Food for a blizzard

Last week, we had a snow day at my job -on that day this meant that the forecast looked so grim that various supervisors sent people home around noon, to avoid dangerous rush-hour drives home. I got home early enough to get started on the evening’s dinner: Aromatic Asparagus and Sweet Potato Curry with Cilantro, from Bryant Terry‘s terrific cookbook, The Inspired Vegan. My only riff on the recipe: use brown mustard seeds, as that’s what our pantry contained. It’s possible my preference for yellow sweet potatoes (and a lot of them) also ended up forming an improvisation from the original recipe. This dish was fantastic: exploding with flavor, and quite filling as well!

Noted: Later, while researching whether my choice to use brown mustard seeds was wise, I learned that it’s a good idea to let the oil heat up sufficiently before putting in the mustard seeds. Otherwise they and their optimal flavor will burn away before we get a chance to taste that flavor. And yet, blackened, they provided some visual interest in the pan and bowl. Thankfully, our turmeric and chili powder were fresh – so much so that they may have hidden the “motor oil” flavor of burned mustard seeds. 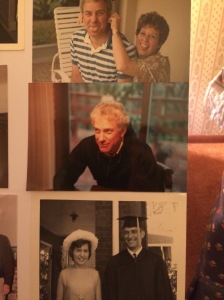 And so: we began to get back into our regular household – namely the home cooking – rhythm, after a heavy week of heaviness.

It’s been almost two weeks since Steve and I were facing the news that his father had passed away. Behind us now are the goodbyes, the visitation and funeral service planning, and the hours spent sifting through photographs and mementos, to help us put together a) stories for participants in both events and b) a fuller picture of a man and a life fully lived. The obituary stated that it was Lewy Body Dementia that caused his death and it’s this disease that started to take him away from us, many months ago. His 75-year life here tapered with love and strength, but it’s the images and stories from 2+ years ago that have brightened many moments in the past 2 weeks, for me.

A flower arrangement from a loving friend in Seattle arrived at the house mid-last week; cards continue to arrive and phone calls are a lot more frequent. The flowers – very fragrant lilies – continue to enhance our home’s main living space. Steve has been advised that in a few weeks, when the march of life without the intermittent “I’m so sorry’s” will return, the grieving will feel more difficult.

On the Sunday of the funeral weekend, I went to a yoga workshop. At one point during that 2 hours of spine-focused study and practice, I looked down at my feet. The skin on both of them showed the flaky, undeniable evidence of a sunburn gained while in Mexico. It was a nice reminder of a great week in the sun, but also a message about change, time passing, and healing. It was maybe the first time I’ve smiled while looking at a sunburn.

Just because a) it may be taken down from the newspaper site at some time, and b) it’s such a joy to read, I’ll post the wonderful words about Bill that Mary wrote, below. Peace, all.

Bill was born on April 10, 1940, in Poplar Bluff, Mo., and graduated from Dexter High School in Dexter, Mo. He graduated from University of Missouri at Columbia, Mo., with a BS and Master’s degrees in electrical engineering.

He married Mary Alice Stone in 1964. He is survived by his wife, Mary of Rochester; a son, Stephen (Arah) Morman of St. Paul; and a brother, James Morman of Lawrence, Kan.; his mother-in-law, Thelma Stone of Chaffee, Mo.; brothers-in-law and sisters-in-law, Ruth and Donald Schulte of Custer, S.D., and James and Nancy Stone of Farmington, Mo.; and numerous nieces and nephews.

He was preceded in death by his parents, Howard and Eleanor Morman, a daughter, Jennifer Morman, and his father-in-law, George Stone of Chaffee, Mo.

Bill worked at IBM Rochester from 1968 to 2001 and for JDSUniphase from 2002 to 2003. He held various engineering and management jobs in Manufacturing Engineering and in the Development Laboratory. He held several patents, both professional and personal. After retirement as an engineer, he fulfilled a lifelong dream of owning a small restaurant — he owned and operated River Trail Picnic Basket ice cream and coffee shop in Lanesboro for eight years.

He was a lifelong member of the Methodist Church and sang in the chancel choir at Christ United Methodist Church in Rochester for more than 25 years. Bill enjoyed travel, hiking, camping and canoeing the Boundary Waters and cross-country skiing, and was passionate about bicycling. He cycled the bike trails in southeastern Minnesota and Wisconsin; biked from Rochester to the Minnesota North Shore; across Minnesota with TRAM several times; completed RAGBRAI twice, completed the Rochester Centurion numerous times; and went on bike tours in Utah, Oregon, California, Montana, Canada, and Mexico’s Copper Canyon, often biking more than 100 miles in one day. Bill enjoyed learning, and studied Spanish in recent years, and was proud that he could converse in Spanish when visiting Mexico. He had a reputation as “the Fix-It Man” and was often called on by relatives and neighbors to help repair TV’s, plumbing, lawnmowers, bicycles and automotive problems.

A funeral service will be at 11 a.m. Saturday, Jan. 30, at Christ United Methodist Church, 400 Fifth Ave. SW, Rochester. Visitation will be from 5 p.m. to 8 p.m. Friday, Jan. 29, at Ranfranz & Vine Funeral Homes, 5421 Royal Place NW, Rochester, and one hour prior to the service on Saturday at the church. Burial will be in Oakwood Cemetery, Rochester.

One thought on “Cooking from home”